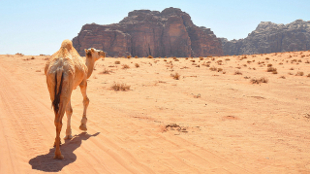 FLICKR, JORGE LÁSCARTwo papers on Middle East respiratory syndrome coronavirus (MERS-CoV), appearing in two different journals this year, have some suspicious redundancy. Both presented data from the very same patient in Saudi Arabia, who died of a lab-confirmed MERS infection. Both drew the same conclusion: that camels are a likely source of the man’s infection. But what the papers do not share are authors.

German virologist Christian Drosten of the University of Bonn apparently helped both teams, landing himself on the author list...

But many, including Drosten, have questioned the link between the man’s virus and a sample taken from the man’s own camel may have been the result of lab contamination. The direct link between the camel and the man’s infection is stated more strongly in the NEJM study, which included the full genome sequences of viruses isolated from both the patient and his animal, while the EID authors hedged, concluding it was possible that the two infections came from a third source.

“This is a much bigger issue than just a duplicate publication,” Michael Osterholm, director of the Center for Infectious Disease Research and Policy at the University of Minnesota, Twin Cities, told ScienceInsider. “It really is a sign of the overall scientific investigation dysfunction that has occurred to date in Saudi Arabia.”

“It typifies what MERS has been all about: very poor communication,” agreed Ian Mackay, a virologist at the University of Queensland, St. Lucia, in Australia, who first drew attention to the papers’ similarities on his blog last week (June 5).

Corresponding with ScienceInsider, Madani, who treated the patient at King Abdulaziz University Hospital last November, claimed that his discovery that the man’s camels were infected by the same virus was stolen from him. Madani claimed to have alerted the Ministry of Health (MOH), where Memish worked, which shortly thereafter “announced that they discovered that a camel was a source of infection to a human being without giving the credit of this discovery to our group or at least to our institution,” Madani wrote to ScienceInsider in an e-mail. This is despite the fact, he said, that he was the one to send a team of veterinarians and virologists to collect samples from the man’s farm.

Memish claimed that the ministry completed its own investigation, which included taking its own samples from the camels, the man’s house, and the hospital where he was treated—standard MOH procedure, according to Memish. “By no means did any practicing physician have the responsibility nor the authority to interfere with the MOH public health investigation or conduct their own investigation without official coordination,” Memish wrote to ScienceInsider.

According to Memish, the health minister at the time, Abdullah Al-Rabeeah, ordered the November 11 announcement that allegedly scooped Madani’s work. The preliminary results were also shared with the Saudi press agency and the World Health Organization and posted the next day on ProMED. Upon seeing the reports, Madani wrote to the president of his university, who Madani said advised him to publish his work as quickly as possible.

When it finally appeared in NEJM last week, not only did the community realize that it was based on the same case study as Memish’s previously published work, researchers also began to raise doubts about the validity of the results. Peculiar differences between two rounds of sequencing, as well as possible errors in the phylogenetic tree, have left scientists scratching their heads. “I think it’s a pretty weird paper overall,” virologist Bart Haagmans of Erasmus Medical Center in Rotterdam, the Netherlands, who said he submitted a letter to NEJM about the phylogenetic issue, told ScienceInsider.

NEJM responded to the overlap between the papers by stating that there is a “substantive difference” between the new publication and the EID paper Memish’s group published in March. The journal did say, however, that its editors had been unaware of other paper and has since added an editor’s note acknowledging the earlier publication.

Memish was fired from the MOH earlier this month (June 2). Although the details of his release from the ministry are unclear, Saudi Arabia announced more than 100 previously unreported cases of MERS infection just one day later. This new tale of double publication aside, the country continues to take heat for not being more forthcoming about the deadly disease that is wreaking havoc on its populace. “Nothing has changed,” Mackay told ScienceInsider—“the new transparency is just more opacity.”