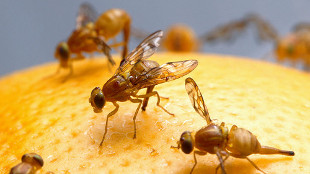 Fruit flies learn and remember a preference for lower-calorie typical lab nutrition over high-calorie food thanks to genes expressed in their brains. Yet when they are faced with prolonged exposure to just the high-calorie option, their metabolic memories are lost, according to a study published this week (April 7) in Nature Communications.

Researchers from the Albert Einstein College of Medicine in New York City wanted to probe the role of learning and memory in the brain’s maintenance of metabolic balance throughout the body. To do so, the scientists trained Drosophila to associate particular smells with either normal food or a version with four times the amount of sorbitol, an artificial sweetener, which upped the calorie content. At first, the flies did not appear to prefer the smell linked to one type of food over...

When the scientists exposed the flies to only high-calorie food for 12 days, however, the flies forgot their developed preference and were unable to distinguish between normal and high-calorie options. These flies not only exhibited high blood sugar and high lipid levels, but also had inflammation in the hypothalamus-like pars intercerebralis region of the brain, as well as lower expression of learning- and memory-related genes in this brain region and the mushroom body, which is also involved in these processes. The scientists found that perturbing these learning and memory genes prevented the flies from establishing a preference for normal food. Experiments in mice also indicated that a high-fat diet caused inflammation and affected gene expression in the hypothalamus, which plays a role in nutrient-sensing.

The work “revealed that Drosophila have a form of metabolic learning and memory, through which the flies are directed to balance food choice with caloric intake,” the authors wrote in their paper. “This response to overnutrition is useful when famine is outstanding; however, it is a dilemma when metabolic disease is of concern.”