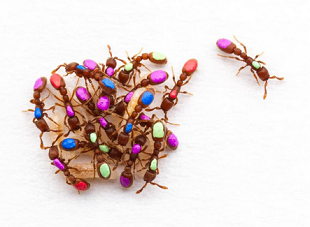 The commonly held view that differences in DNA methylation can determine whether a social insect becomes an egg-laying queen or a nest-tending worker has come under fire from researchers in Switzerland and the U.S. this week. According to a study published yesterday (January 21) in Current Biology, the proposed role for methylation is not sufficiently supported by existing data.

“Discovering that there is no evidence to support methylation as a reason why two ants can behave so differently was, on the one hand, a little sobering,” said study coauthor Daniel Kronauer of Rockefeller University in a press release. “On the other hand, this finding could be really important for those who want to understand the evolution of social behavior and the function of DNA methylation in insects.”

When Kronauer’s team compared methylation levels across multiple samples of clonal raider ants (Cerapachys biroi), the researchers found that variation in the methylation levels between groups of ants performing different roles was not meaningfully greater than the variation between groups performing the same role. In other words, once the data were analyzed using appropriate statistical tests, the apparent differences between queens and workers disappeared.

“We can't say for sure there is no difference in methylation between queens and workers,” said Kronauer in the statement. “What our study does show is that the current evidence is inconclusive.”