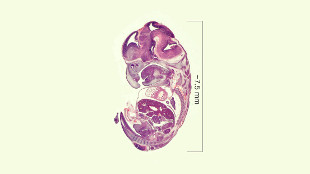 The University of Cambridge-based authors suggest that their recent success comes from their decision to inject the stem cells at a later stage of embryo development. The hiPSCs and hESCs “have the capacity to participate in normal mouse development when transplanted into gastrula-stage embryos,” they wrote in their study.

The human stem cells differentiated into each of the three primary tissue layers—endoderm, ectoderm, and mesoderm—of the developing mouse....

The mouse embryos were cultured for two days, not long enough for differentiation into final tissue types—but the embryos appeared normal during this time period. “The Cambridge team has shown definitively that when stem cells are introduced into early mouse embryos under the right conditions, they multiply and contribute in the correct way to all the cell types that are formed as the embryo develops,” Jeremy Pearson, Associate Medical Director at the British Heart Foundation, which helped fund the study, said in a press release.

“Our finding that human stem cells integrate and develop normally in the mouse embryo will allow us to study aspects of human development during a window in time that would otherwise be inaccessible,” study coauthor Victoria Mascetti said in the press release.