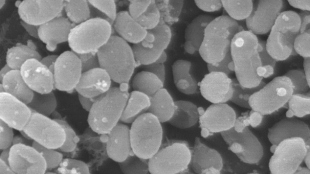 Scanning electron micrograph of the marine cyanobacterium Prochlorococcus, with small vesicles visible near the cell surface.COURTESY STEVEN BILLERMicroorganisms in the ocean release billions upon billions of tiny vesicles each day, but no one had noticed until very recently. Scientists published the first evidence of vesicle production by marine cyanobacteria in Science this week. “The finding that vesicles are so abundant in the oceans really expands the context in which we need to understand these structures,” MIT postdoc Steven Biller, the lead author on the paper, said in a press release.

So far, what Biller and his colleagues do know is that cultured Prochlorococcus—the most numerous photosynthetic organism on earth—continually produce vesicles, which contain proteins, DNA, and RNA; seawater samples are also abundant in vesicles. Vesicles collected from the wild contained DNA from a variety of organisms, suggesting that other microbes also shed them.

Further, the researchers found that nonphotosynthetic bacteria grown in the lab could be sustained with vesicles as their only source of carbon. “That’s kind of neat,” Marvin Whiteley, a microbiologist at the University of Texas, Austin, who was not involved in the study, told Wired. “It really changes how we think about marine ecosystems and how they’re set up and how nutrients are provided.”

Biller’s colleague Sallie Chisholm, a professor of biology at MIT, told LiveScience that it’s not clear why the microbes are making vesicles. “If you have an organism eking out a living in a really dilute environment, where nutrients are extremely low, why would it cast things off into the environment that would limit its own growth?” Chisholm asked. “We figure these vesicles have to have some important function.”