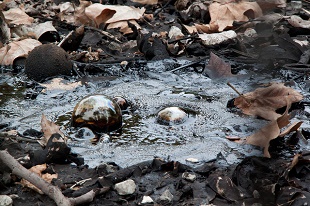 FLICKR, BETSY WEBERTiny droplets of water found in oil samples from a tar pit harbor active microbial life, according to a study published today (August 8) in Science. The microbes actively metabolize oil from the oily lake, and offer hints that other seemingly inhospitable environments might be home to such life forms.

Rainer Meckenstock of Helmholtz Zentrum München’s Institute of Groundwater Ecology in Germany and his colleagues collected undisturbed samples of oil from Pitch Lake, the world’s largest natural asphalt lake, in La Brea, Trinidad and Tobago. Under a microscope, the researchers discovered motile, metabolically active microbes in drops of water no more than one microliter to three microliters in size. The observation was “contrary to a previous hypothesis that the low water activity would impose water stress, making such environments too extreme for microbial life,” Meckenstock and his colleagues wrote in their paper.

Sequencing the microbiomes in...

“It’s hard to get a sample of uncompromised oil,” petroleum microbiologist Julia Foght of the University of Alberta in Edmonton, Canada, told Nature News. “The advantage of this study is that they can collect it at the surface and look at it.”

The results offer strategies to prevent biodegradation of oil reservoirs, clean up oil spills, or look for life in places that might resemble Earth’s tar pits, such as hydrocarbon lakes on Saturn’s moon Titan. Astrobiologist and study coauthor Dirk Schulze-Makuch told Discover’s D-brief: “We discovered that there are additional habitats where we have not looked at where life can occur and thrive.”