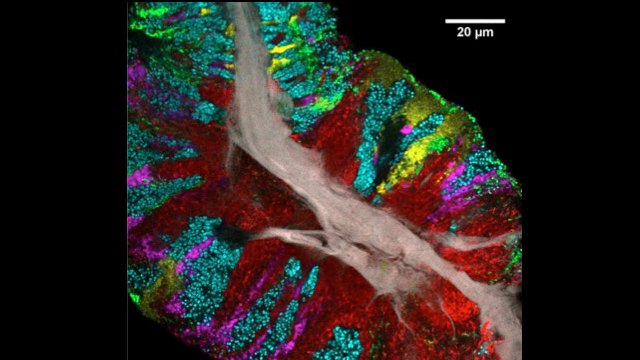 Microbial communities scraped from a human tongue. Each color represents a different genus. Cyan: Rothia, Red: Actinymyces, Yellow: Neisseria, Magenta: Veillonella, Green: Streptococcus, White: host epithelial materialSTEVEN WILBERT, GARY BORISY, FORSYTH INSTITUTE, CAMBRIDGE, MATypical microbiome studies take a sample of tissue, blend it up, and sequence the population’s genetic material to see which organisms are present. Such studies can inform scientists about what species reside at a particular body site, but not how their communities are organized in space. Gary Borisy’s lab at the Forsyth Institute is working to fill in that gap, mapping out microbial neighborhoods in various tissues.

In his latest endeavor, described Sunday (December 3) at the American Society for Cell Biology – EMBO meeting in Philadelphia, Borisy is exploring the surface of the tongue. His group has found that, unlike at other body sites—such as the plaque that...

The researchers scraped the tongue surfaces of 20 human volunteers, then spread the material flat on slides for analyses. It’s not a perfect representation of the surface of the tongue, but more like if you scraped the carpet off a floor. It might fold up and deform somewhat, but the general position of the fibers (the microbes in this analogy) remains intact and next to their original neighbors. 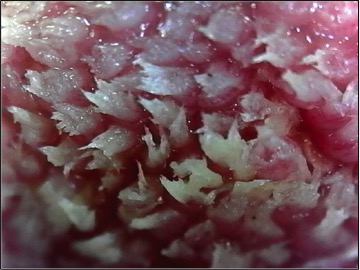 Human tongue covered with filiform papillaeGARY BORISYUsing 17 fluorescent probes—each targeting only one particular genus of bacteria, and each glowing with a unique color—the research team could then see under a microscope how the genera were distributed. Rather than a rainbow sprinkled across the sample, the fluorescent probes segregated into visually apparent domains.

Borisy says he wasn’t surprised that there’s spatial organization in the tongue microbiome, “but to see knock-your-socks-off organization, right with your eye, that was surprising.”

Steven Wilbert, a researcher in Borisy’s lab, described in the presentation that five genera dominated the taxa that formed these clusters. It’s not clear yet what the function of these clumps are in the mouth, but genomic analyses of the bacteria indicate that they have the capacity to perform nitrate reduction. “We’re thinking of the tongue community as an unrecognized organ that facilitates nitric oxide homeostasis,” Borisy tells The Scientist.

His group is exploring this possibility as well as trying to visualize bacterial communities on the tongue itself.