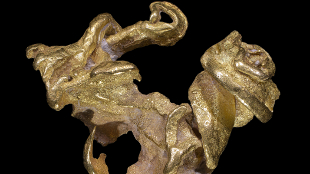 Gold!WIKIMEDIA, DIDIER DESCOUENSResearchers have found that a bacterial species stimulates the formation of gold particles in its environment as a way to survive in solutions containing toxic gold ions. The bacterium, Delftia acidovarans, secretes a compound dubbed delftibactin that precipitates gold ions, causing them to clump into nuggets.

Canadian researchers, who published their work in Nature Chemical Biology this week (February 3), grew the bacteria in the presence of gold ions and found that gold nanoparticles began accumulating in the solution. They also identified the genes responsible for producing delftibactin and shuttling it outside of the bacterial cells.

Frank Reith, an environmental microbiologist at the University of Adelaide in Australia who was not involved in the study, told Nature that the discovery could in the future help clean up toxic gold mine waste water, while recovering more gold from the slurry. “The idea could be to use a bacterium or metabolite to seed these waste-drop piles, leave them standing for years, and see if bigger particles form,” he said.