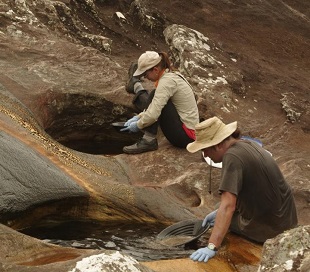 Panning for platinum in BrazilUNIVERSITY OF ADELAIDE (VIA EUREKALERT)

Platinum group metals—comprising platinum and elements like palladium—are industrially important elements due to their corrosion-resistant, nontoxic, and catalytic properties, but are extremely rare in natural environments. Now, researchers in Australia have shown a new role for bacteria in cycling platinum group metals in soils and sediments, offering a better understanding of how to search for these metals. The findings were published yesterday (March 21) in Nature Geosciences.

“Traditionally it was thought that these platinum group metals only formed under high pressure and temperature systems deep underground, and that when they were brought to the surface through weathering and uplift, they just sat there and nothing further happened to them,” study coauthor Frank Reith of the University of Adelaide said in a statement. “We’ve shown that that is far from the case.”

The researchers found that specialized bacterial...

“Finding new deposits is becoming increasingly difficult due to our limited understanding of the processes that affect the way they are cycled through surface environments,” Reith added in the statement. “This improved biogeochemical understanding is not only important from a scientific perspective but we hope will also lead to new and better ways of exploring for these metals.”