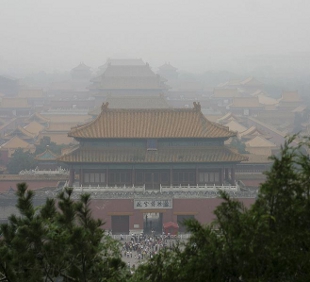 Smog over Beijing's Forbidden CityWIKIMEDIA, BRIAN JEFFERY BEGGERLYThe brown haze that covers Beijing and surrounding areas is home to some 1,300 microbial species, according to a group of researchers in China who used genome sequencing to identify the biological makeup of a particularly thick January 2013 smog. While most of these species are believed to be harmless, some have been linked to allergies and respiratory disease in humans, the researchers reported last month (January 23) in Environmental Science & Technology.

“It’s a proof of principle that one can extract and identify these microbes at the species level,” coauthor Ting Zhu, a biologist at Tsinghua University in Beijing, told Nature. “It adds to our understanding of what we inhale every day.”

Over the course of a week during a severe smog event, Zhu and colleagues took 14 air samples, then filtered them based on size to isolate...

Extracting and sequencing DNA from the samples, the researchers were able to identify some 1,300 different microbial species, including the pneumonia-causing Streptococcus pneumonia, the fungal allergen Aspergillus fumigatus, and a variety of bacteria commonly found in feces. On the smoggiest of days, the proportion of DNA from these allergens and pathogens increased by two to four times relative to DNA from harmless microbes. Zhu told Nature that some of the DNA likely came from dead cells, “so we don’t know if they are still viable,” but even so, the findings point to the potential health risk of severe smog events, particularly for the elderly or immunocompromised.

“There is increasing evidence that bacteria could play an important role in the health effects,” Andrea Franzetti, a microbiologist at the University of Milan-Bicocca, Italy, who has surveyed airborne bacteria in his home city, told Nature.

Correction (February 5, 2014): This story has been updated from its original version to correctly reflect that microbes are divided into those that are less that 2.5 micrometers and those up to 10 micrometers, not millimeters. The Scientist regrets the error.