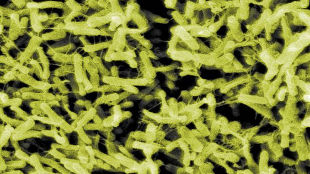 Clostridium difficile WIKIMEDIA, BOTGut bacteria are critical in fighting Clostridium difficile, highlighted by the recent successes in using fecal transplants in treating such infections. But resistance to C. diff infections can’t be attributed to any one microbe; rather, it’s the community of bacteria in the gut that matter, according to a new study that modeled the incidence of infection in mice based on their microbiota.

Patrick Schloss, a microbiologist at the University of Michigan in Ann Arbor, and his colleagues started by giving mice various antibiotics to see how the treatments affected the composition of bacteria in their guts. Then, the researchers challenged the mice with C. difficile and built a mathematical model that could predict a mouse’s susceptibility to the pathogen with 90-percent accuracy. They published their results today (July 14) in mBio.

The researchers note that if a predictive model of this kind could be constructed for humans’ susceptibility to C. difficile, it could help prevent hospital patients from becoming infected. “If we could assess a patient’s microbiota from a stool sample—especially if they are getting antibiotics—we could look at what bacteria are missing,” coauthor Alyxandria Schubert, a postdoc in Schloss’s lab, said in the release. “You could perhaps give patients a probiotic supplement with the goal of restoring their microbiota community structure to a healthy state.”