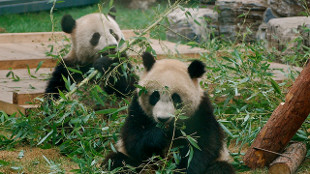 A survey of the gut microbiota of 45 giant pandas published this week (May 19) in mBio suggests that the bamboo-eating bears are short on species of bacteria known to help other herbivores digest plant material. Herbivores that don’t make the enzymes needed to digest cellulose on their own often rely on their gut bacteria to take care of the job. In an effort to understand whether pandas use a similar strategy to digest the large quantities of bamboo they consume, a group of researchers in China produced 16S ribosomal DNA sequence profiles for panda stool samples collected in the spring, summer, and fall over the course of a year.

The team found that panda microbiomes vary widely among individuals and across seasons. Overall, the microbiota composition was less diverse than previously reported for other herbivores, including ruminants, horses, rabbits, and kangaroos. Instead, principle component statistical tests...

“Unlike other plant-eating animals that have successfully evolved, anatomically specialized digestive systems to efficiently deconstruct fibrous plant matter, the giant panda still retains a gastrointestinal tract typical of carnivores,” study coauthor Zhihe Zhang, director of the Chengdu Research Base of Giant Panda Breeding in China, said in a statement.

The researchers combined their findings with previously reported microbiome data from nine captive and seven wild pandas, finding similar patterns. All pandas sampled carried Escherichia and Shigella species at varying frequencies. Other species of bacteria that are either known to degrade cellulose, or related to those that do, were found in relatively lower frequencies in fewer pandas.

Jonathan Eisen, a microbial ecologist at the University of California, Davis, who was not involved in the work told Nature that microbial composition can’t offer conclusions about the ability of the panda’s microbiota to digest cellulose since bacteria unknown to do so may acquire that function. “I’m not convinced at all that there's any limitation to the cellulolytic activity in this system based upon the data they have,” he said.