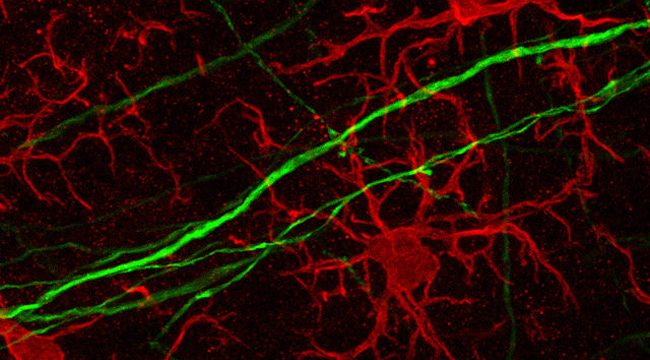 FLICKR, ZEISS MICROSCOPYInflammation in the body may influence the “memory” of immune cells in the brains of mice, researchers report today (April 11) in Nature. If confirmed in humans, the finding could give clues to the development of certain neurodegenerative diseases such as Alzheimer’s.

“Epidemiological studies have shown that infectious diseases and inflammation suffered during a lifetime can affect the severity of Alzheimer’s disease much later in life,” study coauthor Jonas Neher of the German Center for Neurodegenerative Diseases in Tübingen says in a statement. “We therefore asked ourselves whether an immunological memory in these long-lived microglia could be communicating this risk.”

In the study, Neher and his colleagues studied the response of microglia—long-lived immune cells found only in the brain—to repeated bodily infections. The team injected mice that model Alzheimer’s disease with the bacterial component lipopolysaccharide to induce inflammation. The inflammatory response triggered by the first...

Next, the researchers wanted to investigate how the microglia’s responses to infections related to the build-up of amyloid plaques, which accumulate in the brains of humans with Alzheimer’s disease. More amyloid-β plaques had accrued in the brains of mice that received only a single lipopolysaccharide injection, compared with animals that received no shots. But after mice were given four injections and their microglia developed immune tolerance to the lipopolysaccharide, their brains had lower levels of amyloid-β compared with rodents that did not receive any injections.

The “work sets the stage for further investigation of the impact of environmental factors on microglial function in neurodegenerative conditions,” Alexi Nott and Christopher Glass of the University of California, San Diego write in a Nature News & Views article accompanying the new study.

Past studies have shown that infections and conditions such as diabetes or arthritis, which can induce inflammation in the human body, are risk factors for Alzheimer’s disease. To connect the inflammation to microglial behavior, Neher and his team looked for epigenetic changes to the immune cells. The team found that months after the injections, both the trained and tolerant microglia had modifications that corresponded to differences in gene activation that changed the function of the immune cells, including their ability to engulf and destroy amyloid plaques.

“It is possible that also in humans, inflammatory diseases that primarily develop outside the brain could trigger epigenetic reprogramming inside the brain,” Neher says in the statement.

See “As the Brain Ages, Glial-Cell Gene Expression Changes Most”