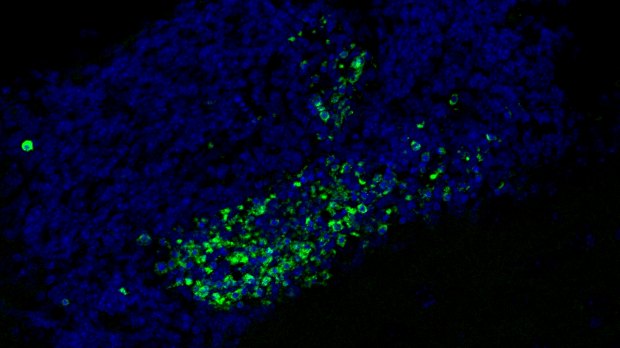 Dead cells (green) in the subventricular zone of a mouse brain whose microglia lack two TAM receptorsSALK INSTITUTEIn the brain, microglia take out the trash, so to speak, by eating up cellular corpses. But their phagocytic activity is not limited to dead cells. A study published in Nature this week (April 6) reveals that, in regions of the mouse brain experiencing neurogenesis, the cells’ inactivity leads to an increase in new neurons.

“It appears as though a significant fraction of cell death in neurogenic regions is not due to intrinsic death of the cells but rather is a result of the microglia themselves, which are killing a fraction of the cells by engulfment,” coauthor Greg Lemke of the Salk Insitute for Biological Sciences said in a press release. “In other words, some of these newborn neuron progenitors are actually being eaten alive.”

Microglia are a type of...

“Some of these cells aren’t healthy, and they may be expressing the ‘eat me’ signals that are normally expressed by dead cells,” Lemke told STAT News. “It must be a mechanism, we guess, for selecting the healthiest and fittest cells.”

The consequences of this unchecked neurogenesis are not yet clear. “Future work to determine the effects of augmented neurogenesis will be informative,” Biogen’s Richard Ransohoff who was not involved in the study wrote in a commentary in Nature. “The results provide startling insight into the process by which the adult brain generates new neurons, and open up avenues for studying microglia,” he wrote.