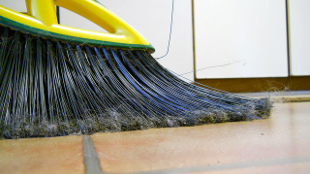 The largest survey of the microorganisms living in houses to date shows that small samples of household dust can carry a lot of information. Researchers used genetic sequencing and microscopy to detail the composition of bacterial and fungal communities in dust samples from around 1,200 households across the U.S. The results were published today (August 26) in the Proceedings of the Royal Society B.

“We have known for a long time that microbes live in our homes,” study coauthor Noah Fierer, a biologist at the University of Colorado, told BBC News. “What we are doing is now is old-fashioned science, to see how they vary across space.”

These initial findings of the citizen science project called The Wild Life of Our Homes indicate that the makeup of the microorganisms in dust is largely determined by a home’s geographic location and its inhabitants.

Bacteria, on the other hand, came mainly from those living in the house, including pets and pests. The authors reported that they could predict whether a house had a canine inhabitant with 92 percent accuracy based on bacterial data alone.

Two types of skin-dwelling and one type of fecal-associated bacteria were more frequently found in homes in which more males than females lived, whereas a vaginal-resident bacterial group was found more often in homes with more females than males, according to Discovery News.

“This is a powerful study,” Rachel Adams, a microbial ecologist at the University of California, Berkeley, who was not involved in the work, told Science.