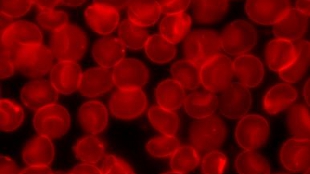 Scientists have crafted an injectable foam containing oxygen-carrying microparticles that could potentially be used to resuscitate patients undergoing severe oxygen deprivation. The team of researchers, most of whom work at Children's Hospital Boston, demonstrated that the microparticle solution could rapidly oxygenate the blood of rabbits struggling to breath in low oxygen conditions. They report their findings in the latest issue of Science Translational Medicine.

"This is a potential breakthrough," Peter Laussen, cardiac intensive care doctor at Children's Hospital Boston who was not involved in the work, told ScienceNOW. "You can apply this across healthcare, from the battlefield to the emergency room, intensive care unit, or operating room."

A body deprived of oxygen is a body in trouble. When major organs like the brain and heart don't receive an adequate supply of oxygen they falter and fail, sometimes in minutes. Traditionally,...

The microparticles, which consist of spherical shells of lipids surrounding a small bubble of oxygen gas, deliver oxygen almost immediately to red blood cells in a way that is safer and more rapid than currently used methods. The research team, led by Children’s Hospital Boston cardiologist John Kheir, found that the solution could completely saturate red blood cells in oxygen-deprived rabbits within seconds of injection, and they kept rabbits with totally blocked airways alive for 15 minutes using the oxygen-infused microparticles. "Essentially as soon as we started injecting it, clinically we started to see an effect," Kheir told ScienceNOW.

Researchers are now testing the microparticle solution on large animals, and if those and later human clinical trials are successful, the therapy could make its way into the clinic or other emergency situations. "This is still in its infancy," Laussen added, "but this idea of a new and novel way to effectively deliver oxygen is, I think, very exciting."