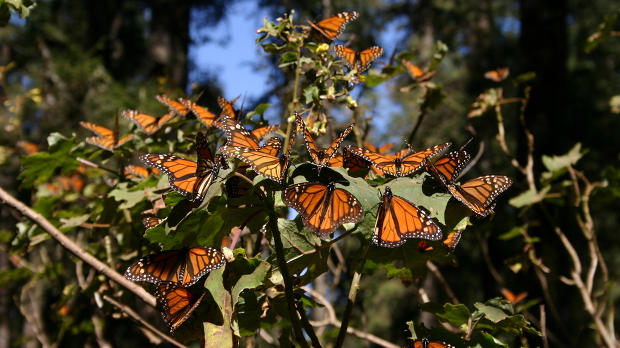 Monarchs in Michoacan, MexicoWIKIMEDIA, SCOTT CLARKResearchers and conservationists are breathing guarded sighs of relief after a new analysis of the area of forest covered by monarch butterflies at hibernation sites in central Mexico last year was more than three times larger than the previous year. The World Wildlife Fund (WWF) announced the findings in Mexico City last week (February 26).

While the 10 acres that hibernating monarchs covered in Michoacán State and Mexico State was more than the 2.79 acres they covered in 2014 and the 1.66 acres they covered in 2013, it is nowhere near the approximately 45 acres the insects covered in 1996. “Now more than ever, Mexico, the United States, and Canada should increase their conservation efforts to protect and restore the habitat of this butterfly along its migratory route,” Omar Vidal, director general for WWF-Mexico, said in a statement.

Though the issue of monarch butterfly decline is far from settled, most scientists who study the insects suggest that the main threats to the species and their remarkable migration are logging in their Mexican overwintering sites and pesticide use in the U.S. and Canada, which harms the milkweed on which the insects exclusively feed.

Conservationists hope to restore monarch butterfly populations to 250 million by 2050. “A simple stand of native milkweed can make every backyard, school, community center, city park and place of worship a haven for breeding or migrating monarchs, and together we can bring about the greatest citizen conservation victory of our generation,” Ashe told Discovery.