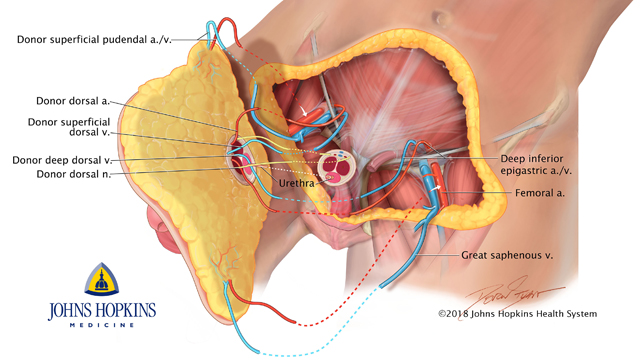 JOHNS HOPKINS MEDICINEAn Afghanistan War veteran whose legs and genitals were blown off in a roadside bomb explosion received a transplanted penis, scrotum without testicles, and partial abdominal wall in a 14-hour surgery on March 26 at Johns Hopkins Hospital.

“We are hopeful that this transplant will help restore near-normal urinary and sexual functions for this young man,” W.P. Andrew Lee, professor and director of plastic and reconstructive surgery at Johns Hopkins University’s School of Medicine, says in a statement.

Nine plastic surgeons and two urological surgeons performed the transplant, taking the genitals from a deceased donor. The surgery is considered the “most complex and extensive penis transplant to date, and the first performed on a combat veteran maimed by a blast,” according to The New York Times. A successful penis transplant was first performed in South Africa in 2014 and a second at Massachusetts General...

The transplant is the result of years of research and could provide a viable surgical option to restore urinary tract and sexual function in people with severe genital injuries.

“While extremity amputations are visible and resultant disability obvious, some war injuries are hidden and their impact not widely appreciated by others,” Lee told reporters in a press conference, according to The Washington Post. He noted the “devastating impact” that such injuries have on men’s identities, self-esteem, and intimate relationships. [not sure what’s going on with the many quotes here]

The veteran, who asked to remain anonymous, tells The New York Times, “That injury, I felt like it banished me from a relationship. . . . I struggled with even viewing myself as a man for a long time.” After the surgery, he says in the statement, “When I first woke up, I felt finally more normal.”

The path forward will not be easy. The veteran’s body could reject the transplant, and to prevent that he has received a bone marrow transfusion from the donor and will also take immunosuppressive drugs. There are still questions of whether he will regain sexual function. According to USA Today, the man who received the penis transplant at MGH in 2016 has not yet recovered full sexual capabilities.