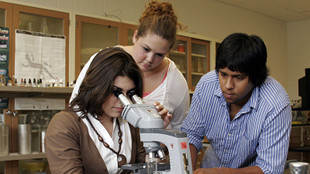 WIKIMEDIA, UNIVERSITY OF PITTSBURGH AT BRADFORD

The Howard Hughes Medical Institute (HHMI) will give up to 15 science professors $1 million over 5 years to incorporate their research into their teaching.

The award was announced yesterday (March 14), and natural sciences professors are eligible if they teach at any of the around 100 schools classified by the Carnegie Foundation for the Advancement of Teaching as having “very high” research activity.

“We are looking for scientists who have already thought about how to integrate their research with their student activities and who are motivated to pursue tough questions, but who may not have had the time or resources to implement their ideas,” David Asai, HHMI’s director for precollege and undergraduate science education, said in a press release.

HHMI launched the award in 2002 and has since given it to 40 professors. Past winners have included Utpal Banerjee of the...

Winners will be permitted to use one quarter of their grants to fund research, provided the research is involved in helping students learn. Applicants must establish that they are eligible by June 4, 2013, and turn in their applications by July 16, 2013. Finalists will present their plans in May 2014, and the prizes will be awarded the following summer. The application can be found at www.hhmi.org/competitions.