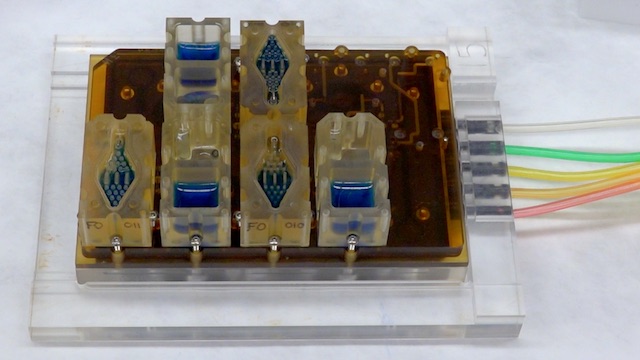 EVATAR is a chip around the size of a human hand that contains five mini-organs: a uterus, vagina, liver, ovaries, and fallopian tubes. All the tissues come from humans, except the ovaries, which are taken from mice (since they are rarely removed from people). Each organ sits in its own compartment, which is linked to the others through minuscule tubes that carry blood-like liquid and hormones. To mimic the 28-day menstrual cycle on the chip, the team first added follicle stimulating hormone, then luteinizing hormone 14 days later. This successfully stimulated the ovaries to produce estrogen and progesterone, and release an egg, at key stages in the cycle.

The team hopes to use EVATAR to both better understand the human reproductive system and test new drugs. “Could it potentially be better than an animal model? Yes, because you’re using human cells,” coauthor Jeffrey Borenstein, a biomedical engineer at Charles Stark Draper Laboratory told STAT News. “Is it perfect? No, because there are always going to be limitations.”

Woodruff and colleagues now aim to build personalized EVATARs using patient-derived stem cells. The team is also working on a male version of the reproductive system on a chip, ADATAR, which they hope to release within a year.