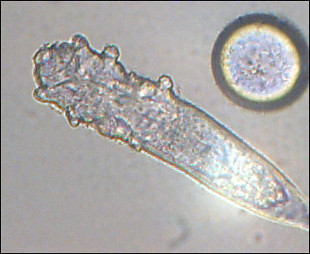 WIKIMEDIA, BLAUERAUERHAHNSome mite populations may be better suited to survive in the hair follicles of human hosts from certain geographic regions, according to a study published in PNAS today (December 14). Michael Palopoli of Bowdoin College in Brunswick, Maine, and colleagues isolated Demodex folliculorum mite DNA from 70 people of diverse geographic ancestries, analyzing more than 200 sequences from the anthropod’s mitochondrial genome. Through a phylogenetic analysis, the researchers identified one globally distributed mite lineage associated with European-ancestry hosts, plus three other lineages primarily associated with hosts of Asian, African, and Latin American ancestry.

“This particular parasite has a few real strengths that makes it particularly good for studying human evolution,” David Reed from the Florida Museum of Natural History, who was not involved in the research, told The Atlantic. “It’s ubiquitous, it stays within individuals and family groups, and it’s been with us for a long time.”