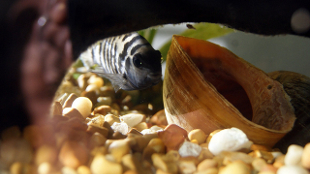 A black convict African cichlid FLICKR, KEVIN TIMOTHYFor decades, behavioral researchers have used the convenient trick of presenting animals with a mirror to elicit and study their aggressive tendencies. The thinking went that, unable to recognize themselves, animals ranging from birds to fish would react as if they were encountering another member of their own species. Not only was the technique easy to use, it reduced the numbers of animals need to run certain experiments and provided each individual with a “rival” that was “perfectly matched in terms of size and weight,” Nature reported.

But animal-behavior researcher Robert Elwood of Queen’s University in Belfast, U.K., and his colleagues have found evidence that challenges the validity of the mirror trick. Specifically, cichlid fish (Amatitlania nigrofasciata) turn their right side toward their opponent in aggressive displays, resulting in the two fish aligned head-to-tail. But when one of the animals...

“The biggest problem is that we are testing for a behavior that requires a series of actions and reactions from at least two participants, in a setting that only includes one individual,” behavioral ecologist Valentina Balzarini of the University of Berne told Nature. “I am thrilled by these last years’ questioning of mirror tests, especially from the neurobiological point of view.”

“I think that scientists generally underestimate the cognitive skills of fish,” Stanford University’s Russell Fernald added. “We have shown that cichlid fish can do logical reasoning. Fish can infer social rank by observation alone. So why should they be fooled by a mirror?”