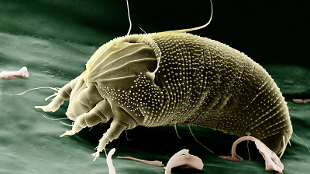 Rust Mite (Aceria anthocoptes) Wikimedia Commons, LycaonFighting for survival in a shared habitat, some mites kill the young of rival species, both to consume as food and to reduce competition for their own offspring. But mites that survive such attacks hold a grudge, according to a study published this week (October 11) in Scientific Reports. When previously assaulted juveniles reach adulthood, they attacked juveniles of the opposing species—their former tormentors—more often than those that had not been attacked as youngsters did.

Working in the lab, an international team of biologists led by Arne Janssen at the University of Amsterdam observed the behaviour of Berlese mites (Iphiseius degenerans) and Oudemans mites (Neoseiulus cucumeris), “reciprocal predators” that feed on the juveniles of the other species even when other food is available.

Moreover, “the attacks were specifically aimed at predators of the species to which they had been exposed,” the authors wrote, which suggests that mites recall and recognize the species that attacked them when they were young. The findings also demonstrate that early experience affects behavior in adulthood, when predator-prey roles are reversed.

It is not clear whether the same thing happens in the wild, however, because in the study the mites were confined to small arenas, such that the juveniles could not escape attacks. The authors predict that adult and juvenile mites come into contact with each other less frequently under natural conditions, and thus may never have a grudge to bear.