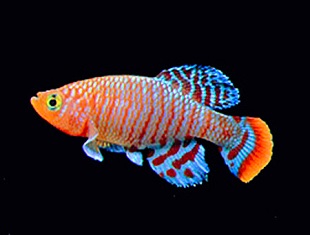 N. rachovii, a related speciesWIKIMEDIA, ANDREAS WRETSTROMThe activity of mitochondria decreases as humans get older—a trend thought to be related to worsening health. But in African turquoise killifish (Nothobranchius furzeri), the world’s shortest-lived vertebrate, there appears to be an inverse relationship between the early-life expression of genes involved in mitochondrial function and average life span, according to a study published yesterday (February 24) in Cell Systems.

The researchers analyzed gene expression in fin tissue collected from 152 male killifish at various times in their 12-month lives. They found that young fish with low expression of genes involved in respiration lived longer than those who’d exhibited high expression early in life. What’s more, exposing the fish to small doses of rotenone, a natural poison that inhibits mitochondrial function, extended life span in the fish by about 15 percent.

“Up to the present, it was thought that...

One explanation for the relationship could be that inhibiting mitochondrial function produces free radicals that, in low quantities, can stimulate a positive, adaptive response to stress known as hormesis, the authors suggested. “It was recently demonstrated that the positive effects of physical exercise in humans are due to hormesis, and are destroyed by treatment with antioxidants,” explained Cellerino in the statement. He added that although the link has yet to be tested in humans, the team’s finding has “implications on the development of strategies to improve health in older people and prevent aging-associated diseases.”

“This study supports the hypothesis that mitochondria, the batteries of the cells, are determinants in the aging process,” Joao Passos of Newcastle University Institute for Ageing in the U.K. who was not involved in the study told New Scientist. “This and other studies offer us clues about potential interventions to ameliorate the aging process.”