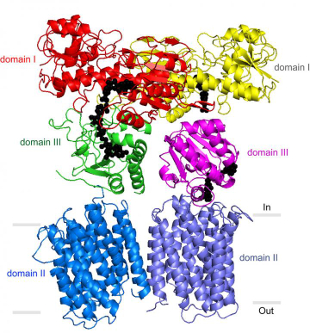 Structure of nicotinamide nucleotide transhydrogenase (TH)IMAGE BY JOSEPHINE LEUNG, COURTEST OF THE STOUT LAB, SCRIPPS RESEARCH INSTITUTENicotinamide nucleotide transhydrogenase (TH), an evolutionarily conserved enzyme that has recently been linked to diabetes and cancer, plays a role in the pumping of protons across the mitochondrial membrane. Similar to the process that drives the production of ATP, TH enzymes support the flow of protons back through the membrane to create NADPH, a compound important for defusing oxygen free radicals. In a study published this week (January 8) in Science, researchers at Scripps Research Institute and elsewhere detail the complete structure of TH, providing clues regarding its precise mechanism of action in this process.

Using technology developed by Vadim Cherezov at University of Southern California, the Scripps team solved the crystal structure of the transmembrane portion of the TH enzyme at 2.8 angstroms resolution. The researchers also imaged crystals of...

“Our most striking finding was that the two domain III structures are not symmetric—one of them faces up while the other faces down,” lead author Josephine Leung, a graduate student in the lab of Scripps researcher C. David Stout, said in a press release. “We suspect that the passage of the proton is what somehow causes this flipping of the domain III structures.”

“Despite its importance, TH has been one of the least-studied of mitochondrial enzymes,” Stout added in the release. “Our new study helps clear up some mysteries—suggesting how the enzyme structure might harness protons and indicating that its two sides are able to alternate functions, always staying in balance.”