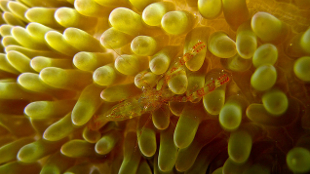 A Caribbean sun anemone (Stichodactyla helianthus)WIKIMEDIA, OMAR SPENCE PHOTOGRAPHYA slightly modified synthetic version of a peptide found in the toxin of Caribbean sun anemones boosts metabolic activity in obese mice fed a junk-food diet, according to a study published this week (May 27) in the Proceedings of the National Academy of Sciences. The results indicate that the compound, known as Shk-186, which is already a promising drug candidate for the treatment of several autoimmune diseases, could also be developed as a potential treatment for obesity and insulin resistance in humans.

Developed by George Chandy of the University of California, Irvine, and colleagues, Shk-186 potently and specifically blocks the Kv1.3 potassium channel on T-lymphocyte cells, the upregulation of which is implicated in autoimmune diseases. (For more on Shk-186 and other toxin-derived drugs, see our recent story “From Toxins to Therapeutics.”) However, potassium channels control...

In tests on mice fed a high-fat, high-sugar diet, treatment with ShK-186 reduced weight gain, white fat deposits, fatty liver, blood cholesterol, and blood sugar, the researchers reported. They think it did so by activating calorie-burning brown fat, suppressing the inflammation of white fat, and augmenting liver function. (Read more about brown fat and obesity in the May 2012 story, “Treating Fat with Fat.”)

“These data are quite exciting and strongly support the notion that inhibition of the Kv1.3 channel provides a highly effective method for managing obesity and its associated metabolic abnormalities,” Gary Desir of Yale University said in a press release issued by UC Irvine and Kineta, the Seattle-based biotech company that is developing Shk-186.