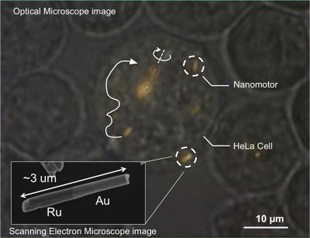 MALLOUK LAB, PENN STATE UNIVERSITYManipulating tiny machines inside the body for diagnosing or treating illness is a goal that medicine has not yet achieved, but new research takes scientists one step closer. A team from Penn State University has safely manipulated nanomotors in living cells, according to a study published online today (February 12) in Angewandte Chemie.

“Our first-generation motors required toxic fuels and they would not move in biological fluid, so we couldn’t study them in human cells,” project leader Thomas Mallouk said in a statement. “That limitation was a serious problem.”

Mallouk and his colleagues addressed this issue by creating the nanomotors out of gold rods—approximately 300 nanometers in diameter and three microns long—and powering them using ultrasound, which at low power is non-toxic. They incubated the nanomotors with HeLa cells, which internalized the motors after about 24 hours. The researchers used low-power ultrasound to...

“This research is a vivid demonstration that it may be possible to use synthetic nanomotors to study cell biology in new ways,” Mallouk said in the statement. “We might be able to use nanomotors to treat cancer and other diseases by mechanically manipulating cells from the inside. Nanomotors could perform intracellular surgery and deliver drugs noninvasively to living tissues.”