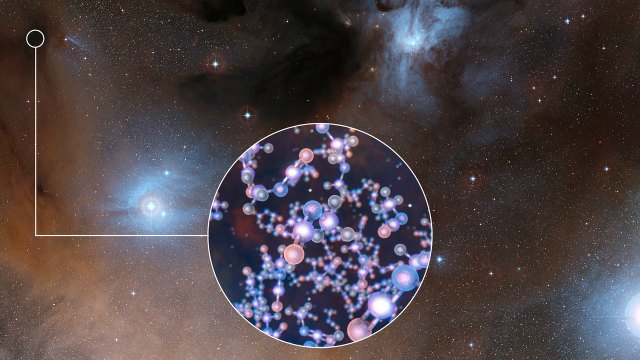 Star formation where astronomers detected methyl isocyanate (inset: drawing of molecule)ESO/DIGITIZED SKY SURVEY 2/L. CALCADAScientists have detected, in the constellation Ophiuchus, about 400 light-years away, an organic molecule similar to protein building blocks. Methyl isocyanate is present in dust surrounding baby stars that will one day resemble our own Sun, supporting the idea that life’s raw ingredients were spawned from the formation of the solar system.

Martín-Doménech from the Centro de Astrobiología in Madrid, Spain, and colleagues used the Atacama Large Millimeter/submillimeter Array (ALMA) in Chile to look for telltale signatures of the molecule in radio spectra. They reported their results in the Monthly Notices of the Royal Astronomical Society.

“Either life originated completely on the surface of the Earth, or some building blocks were formed in the solar nebula prior to the formation of the Earth and delivered by comets to our planet, where biochemical reactions continued leading...

Another group of astronomers, led by Niels Ligterink at the Leiden Observatory in the Netherlands and Audrey Coutens at University College London, published similar findings in the same journal. Both papers were announced yesterday (June 8).

“It shows the level of complexity you can get to before planets form is pretty high,” Karin Öberg, an astrochemist at the Harvard-Smithsonian Center for Astrophysics who was not involved in the work, tells Science. “A lot of [spectral] lines were detected, which gives confidence that it’s real. It’s a safe detection.”

The multiple-star system where the methyl isocyanate signal was picked up also contains components of the simple sugar glycolaldehyde, a finding reported in 2012.

“This star system seems to keep on giving! Following the discovery of sugars, we’ve now found methyl isocyanate. This family of organic molecules is involved in the synthesis of peptides and amino acids, which, in the form of proteins, are the biological basis for life as we know it,” Ligterink and Coutens say in a press release.

Still, there remain questions about how life started on Earth. Oberg cautions in the Science article against jumping to conclusions. “We don’t know the chemical process. We don’t know if methyl isocyanate is crucial, and we don’t know how peptides form.”