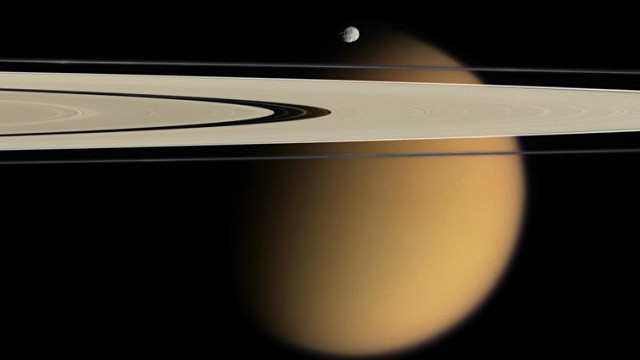 Saturn’s orange moon Titan peeks from behind two of Saturn's rings. Epimetheus, another of Saturn’s 62 moons, appears just above the rings.FLICKR, NASA GODDARD SPACE FLIGHT CENTERResearchers studying Saturn’s largest moon have identified billions of tons of vinyl cyanide in the orange haze that hangs above Titan. They suspect that these molecules, which may be able to self-assemble into cell membrane–like structures under the right conditions, rain down on the moon’s poles during the winter. The study was published last week (July 28) in Science Advances.

“Titan has unique and weird chemistry, and all the evidence we have so far suggests there’s a possibility for it to be doing a lot of things we think are necessary for life to exist,” Johns Hopkins University’s Sarah Hörst, who was not involved in the research, tells National Geographic.

NASA’s Maureen Palmer and colleagues discovered the signature of vinyl cyanide in data collected by the ALMA cluster of telescopes in Chile. The molecules are thought to condense and rain on the moon’s surface, primarily in the poles during their alternating winters.

A 2015 computer modeling study published by a group at Cornell University found that vinyl cyanide was likely to self-assemble into strong and flexible membrane-like structures called azotosomes. “The flexibility of that membrane would be the same as the flexibility for our cell membranes on Earth, which is really cool because they’re totally different in chemical composition,” Paulette Clancy, a Cornell chemical and biomolecular engineer who coauthored the 2015 study, tells The Verge.

Just what vinyl cyanide is doing on Titan remains unclear, however. “It could be coming down all over Titan and just lying on the surface as an organic residue, it could be reactive and making long chain polymers,” study coauthor Conor Nixon of NASA’s Goddard Space Flight Center tells National Geographic. “Or, it could be dropping into the lakes, and once it’s in the lakes, it self-organizes.”

If life could exist on Titan, it would be very different from the organisms here on Earth. While the moon may look Earth-like with its liquid lakes, streams, and oceans and regular cloud cover, its chemistry couldn’t be more different. Instead of water, the waterways on the icy cold moon (with temperatures as low as -290° F) are composed of ethane and methane. “There is nowhere else in the entire solar system that has those liquid hydrocarbon lakes,” says Nixon. “You need a whole new biology to support that.”