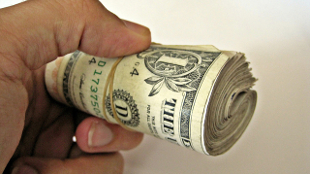 FLICKR, IMAGES MONEYAnalyzing the genetic material on 80 $1 bills sampled from a Manhattan bank, researchers from New York University (NYU) have discovered a diverse array of microbes, most of which are relatively harmless to humans, but a few that may leave you washing your hands after every cash transaction. It total, they found more than 3,000 bacterial types, including some drug-resistant species, and known microbes accounted for just 20 percent of the non-human DNA the researchers isolated; the rest belongs to as-yet unidentified species.

“The idea is [that] traces of DNA which are left on the money can tell us about the state of health of New Yorkers,” project leader Jane Carlton of NYU’s Center for Genomics and Systems Biology told The Scientist late last year, as the work was still underway.

While the numbers may seem startling, the presence of microbes on money should not come as...

The most abundant species the researchers identified were those that cause acne, followed by benign skin flora. More alarming discoveries included pathogenic Staphylococcus species as well as bacteria associated with gastric ulcers, pneumonia, and food poisoning. The researchers also found DNA from antibiotic-resistance genes, such as those carried by the deadly methicillin-resistant Staphylococcus aureus (MRSA).

The researchers even found evidence of anthrax, although Carlton notes this shouldn’t necessarily be cause for concern. “Anthrax is a very common bacteria in soil,” she told NPR’s Shots. “People who work with soil, like farmers, are often exposed to it.”

Nevertheless, the microbial diversity identified highlights the likelihood that cash—one of the most common items to be distributed internationally—could spread disease around the world. A 2010 study that investigated currencies from 10 different countries, including Australia, China, the U.K., Ireland, Mexico, and the U.S., found similarly dirty money, and the authors recommended “that current guidelines as they apply in most countries with regard to the concurrent hygienic handling of foods and money should be universally adopted.”