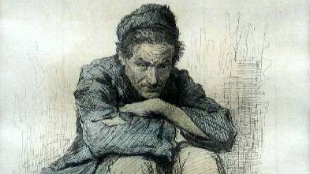 WIKIMEDIA, ANTONIO PICCINIWorrying about money can clearly preoccupy the mind. Researchers now show that hovering concerns over money might also dim one’s mental function. The results of two experiments published today (August 29) in Science support the idea that there might be a causal relationship between financial strife and poor decision-making. “Previous views of poverty have blamed poverty on personal failings, or an environment that is not conducive to success,” Jiaying Zhao, one of the study’s authors, said in a press release. “We’re arguing that the lack of financial resources itself can lead to impaired cognitive function.”

Zhao, who studies human behavior at the University of British Columbia, along with her colleagues conducted both field and lab experiments. In one experiment, Zhao’s team asked New Jersey mall shoppers with various incomes to think about how they might take care of car repairs. When the cost of the hypothetical...

In a second experiment, the researchers gave Indian sugarcane farmers cognitive tests before and after the harvest, which corresponds to fluxes in income. The farmers are typically constrained financially before the harvest and flush after it. Again, the results showed that the farmers performed better on the mental tasks after the harvest, when money was coming in.

“That’s not to say that poor people are less intelligent than others,” said co-author Sendhil Mullainathan, an economics professor at Harvard University, in another press release. “What we show is that the same person experiencing poverty suffers a cognitive deficit as opposed to when they’re not experiencing poverty.”

The researchers estimated that cognitive deficits related to financial woes are on par with the loss in function resulting from staying awake all night—a drop in IQ of around 13 points. They called for policy makers to be aware of procedures, such as long forms to fill out, which might tax the cognitive resources of the poor. In its report, Zhao’s team wrote that “the data suggest a rarely considered benefit to policies that reduce economic volatility: They are not merely contributing to economic stability—they are actually enabling greater cognitive resources.”