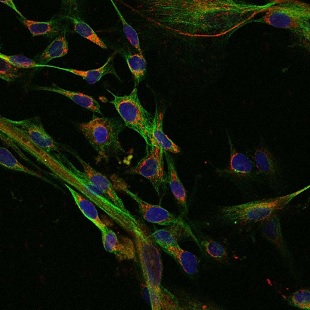 Human fibroblasts derived from embryonic stem cells showing nuclei (blue) and mitochondria (red)SHOUKHRAT MITALIPOVThe number of mutations in mitochondrial DNA (mtDNA) could vary substantially between different lines of induced pluripotent stem cells (iPSCs), according to a study published last week (April 14) in Cell Stem Cell. The findings suggest the need to screen mtDNA for mutations before iPSCs are used in the clinic.

“People tend to look just at the nuclear genome,” study coauthor Taosheng Huang of Cincinnati Children’s Hospital said in a statement. “But if you want to use iPS cells in a human, you must check for mutations in the mitochondrial genome.”

To investigate the frequency of mitochondrial defects in adult somatic cells, the team measured the number of mtDNA mutations in skin and blood samples donated by a 72-year-old volunteer. When cells were pooled for analysis, the researchers identified relatively low levels of...

“We call it the freckled effect,” Huang explained in the statement. “Every single cell can be different. Two cells next to each other could have different mutations or different percentages of mutations.”

Comparing iPSC lines generated using somatic cells from volunteers between the ages of 24 and 72, the team also found that the number of mtDNA defects increased with age. Many of those defects were nonsynonymous, a finding that the researchers argued in their paper highlights the need to screen mtDNA in iPSCs, particularly from older patients.

“It’s one of those things most of us don’t think about,” stem-cell researcher Jeanne Loring of the Scripps Research Institute in La Jolla, California, told Nature, adding that her team will be examining the mitochondria in the stem cells they have generated.

“This is definitely going to have an impact” on clinical trials using iPSCs, Dieter Egli of the New York Stem Cell Foundation told Nature. “For therapy, you can’t just assume it does or doesn’t work.”