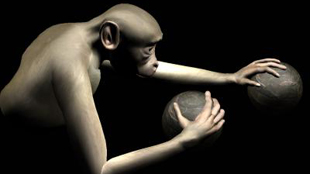 EUREKALERT, DUKE CENTER FOR NEUROENGINEERINGParalyzed patients have used brain-machine interfaces (BMIs) to control one robotic limb at a time, but figuring out how to control two arms at once is challenging. Researchers from Duke University have now shown that rhesus monkeys are capable of performing reaching movements with two arms of an avatar simultaneously using a BMI. Their findings were published in Science Translational Medicine last week (November 6).

“No device will ever work for people unless it restores bimanual behaviors,” senior author Miguel Nicolelis, a professor of neurobiology and biomedical engineering at Duke University in Durham, North Carolina, told Science NOW. “You need to use both arms and hands for the simplest tasks.”

Nicolelis and his colleagues implanted hundreds of tiny electrodes in the brains of two rhesus monkeys, which allowed the animals to control reaching movements of an onscreen avatar. They trained the monkeys to...

“We have high hopes, but we need to be patient,” Daofen Chen, who was not involved in the work and is the extramural research program director at the National Institute of Neurological Disorders and Stroke in Bethesda, Maryland, told Popular Science. “Their study is a significant step forward. It could lead, eventually, to more complicated tasks,” Chen told Pop Sci. But bimanual movements are not necessarily this simple, he continued, and “brain research—it’s really a long haul.”