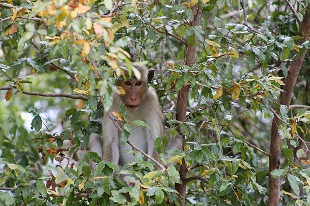 Rhesus monkeyFLICKR, SHANKAR S.Researchers have used two rhesus monkeys in an intriguing proof-of-principle experiment testing the ability to control a paralyzed body or limb. They used a machine to covert the brain activity of one monkey, called the master, into electrical impulses applied to the spinal cord of a sedated animal, called an avatar, which moved in response to the stimulation.

The results, published this week (February 17) in Nature Communications, could provide insight for how thoughts might be translated into movement of paralyzed patients.

“This work in primates shows how this disconnection between brain and controlled movement could be overcome using brain machine interfaces that have the ability to identify the user’s intention or desire to perform a specific movement and, once identified, how this intended action can be translated through neural stimulation into the muscle activations that achieve the final goal of the movement,” biomedical...

The scientists, who hailed from Harvard Medical School, implanted a brain chip capable of monitoring 100 neurons into the master monkey, recorded the cells’ electrical activity during training, and then matched the patterns of neural activity with the physical actions of the monkey. The researchers also implanted 36 electrodes in the spinal cord of the avatar monkey, then tested how the activation of the electrodes could elicit different movements from the animal.

Finally, the team connected the two monkeys to each other, such that the activity being recorded from the master’s brain controlled the movements of the avatar in real time. The master was to control the movement of a cursor using a joystick held by the avatar, and, 98 percent of the time, it succeeded.

“The goal is to take people with brain stem or spinal cord paralysis and bypass the injury,” Ziv Williams, told BBC News. “The hope is ultimately to get completely natural movement, I think it’s theoretically possible, but it will require an exponential additional effort to get to that point.”

“Whilst the control of limbs is sophisticated, it is still rather crude overall,” Christopher James of the University of Warwick agreed in a statement. Additionally, increased muscle rigidity following paralysis, as well as changes in blood pressure, pose challenges for restoring precise control.

Nevertheless, James said that the implications of the new research were profound, “especially for controlling limbs in spinal cord injury, or controlling prosthetic limbs with limb amputees.”