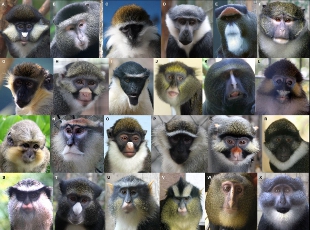 The many faces of the guenon monkeyALLEN, W. L., STEVENS, M., AND HIGHAM, J. P. (2014) NATURE COMMUNICATIONSGuenons, Sub-Saharan forest-dwelling monkeys that belong to genus Cercopithecus, have evolved dramatically different facial patterns as a mechanism to reduce the chances of cross-species breeding, according to a paper published last week (June 26) in Nature Communications. Among 22 species of guenon studied by researchers from New York University and the University of Hull in the U.K., distinctive features included ear tufts, nose spots, eyebrow patches, and wispy cheek fur. The striking facial characteristics evolved as a means of distinguishing between species, which commonly live in close proximity within dense Central and West African forests. “If closely related species overlap geographically, they run the risk of hybridizing,” James Higham, a primatologist at New York University and coauthor of the paper, told Wired. “You need a good way to...

Guenon species have been known to hybridize, and the resultant offspring are typically sterile. Higham and his colleagues used facial recognition algorithms to quantify the variation in the monkeys’ faces. They found that monkeys that shared habitats had more visually distinctive faces. The researchers are now going back to determine whether the facial differences are more pronounced between species currently found in the same space or species that were in geographic proximity when they first evolved.

“We have good molecular data suggesting when each species arose,” Higham told Wired. “We can ask questions about which guenon species overlapped at the time of speciation events, and we can compare that to those that each species geographically overlaps with now.”