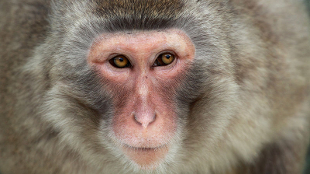 WIKIMEDIA, ALFONSOPAZIf an experimenter touches a subject’s hand, which is hidden from view, while simultaneously touching the same location on a rubber hand that is left in sight, the subject will “adopt” the rubber hand as his own. This bizarre effect has to do with the brain’s maps of the body, called schema, originally proposed more than 100 years ago by neurologist Henry Head, who suggested that they might extend beyond the physical body to include tools and other objects. Now, research published today (August 26) in Proceedings of the National Academy of Sciences points to a neurologic mechanism behind the phenomenon.

Solaiman Shokur of L'Ecole Polytechnique Fédérale de Lausanne (EPFL) in Switzerland and his colleagues worked with two macaques in a variation of the rubber-hand experiment described above. One at a time, the researchers strapped the monkeys into a special chair that hid their arms from view while...

When the real and virtual touches corresponded appropriately, neurons in both the somatosensory and motor cortices began to fire simply upon seeing the touches on the screen, suggesting the two brain regions have become linked in a way that “tricks” the monkeys into adopting the virtual limbs as their own. When the virtual and physical touches were dissociated, however, fewer neurons responded, The Guardian reported.

“The study shows for the first time that the somatosensory or touch cortex may be influenced by vision, which goes against everything written in neuroscience textbooks,” coauthor Miguel Nicolelis, professor of neurobiology at Duke University School of Medicine, said in a press release. “The findings support our theory that the cortex isn’t strictly segregated into areas dealing with one function alone, like touch or vision.”

The results could have implications for patients fitted with prosthetics that can convey sensory information to the wearer, the authors suggest. “As we become proficient in using tools—a violin, tennis racquet, computer mouse, or prosthetic limb—our brain is likely changing its internal image of our bodies to incorporate the tools as extensions of ourselves,” said Nicolelis, who earlier this year announced plans to reveal a brain-controlled exoskeleton at the opening ceremony of the 2014 FIFA Football World Cup.