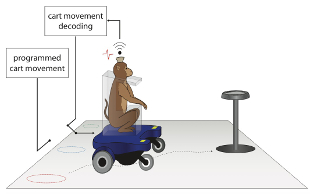 Researchers use a brain-computer interface to allow monkeys to steer a wheelchair-like cart to a food reward.KATIE ZHUANGTraining a monkey to navigate a wheelchair is as easy as letting the animals go for a few rides—that is, assuming they have electrodes implanted into their brains that allow researchers to decode their neural activity and use it to steer the chair via a brain-computer interface (BCI). Researchers in the Duke University lab of Miguel Nicolelis, who helped design and build the exoskeleton that allowed a paralyzed man to kick off this summer's World Cup games, presented their work on two wheelchair-driving monkeys at this week's Society for Neuroscience (SfN) conference being held in Washington, DC.

The team first recorded activity in the motor and sensory cortices of monkeys riding around in the chair. A computer decoder then correlated this neural activity with the direction of movement of the chair,...

Whether the results can be generalized to the neural activity of monkey navigation remains to be seen, but “I think it’s a big step from navigation in virtual environment,” Tseng said. “Although our work [is] not close to how monkeys navigate in the jungles or on the trees, [it] allows the monkeys to navigate on a wheelchair in the real world.”

Moreover, the group recorded from a similar set of neurons as has been done when training monkeys to move a cursor on a computer screen, noted collaborator Allen Yin, a graduate student in Nicolelis's lab. “This is significant because unlike actuators such as cursors and robotic arms used in many other [BCI] experiments, a wheelchair is much less similar to a monkey’s limbs. We may then extrapolate this to hypothesize that a monkey may be able to control apparatus more complex than a wheelchair via [BCI].”

(For more on BCIs, see this month's feature story, “Neuroprosthetics.”)