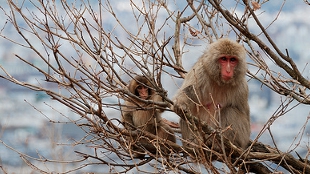 After taking measurements from the air, Fukushima University scientists are hoping to get a more detailed picture of radiation levels on the ground by recruiting the help of native wild macaques. The animals are outfitted with a device that reads the level of radiation, location, and distance from the ground.  Together researchers hope the data will reveal how the radiation spread, and where the highest levels can be found.

The monkey live in a highland to the west of Minamisoma city, located some 16 miles from the Fukushima Daiichi plant, which failed in March following the earthquake and resulting tsunami and leaked large amounts of radiation into the surrounding areas.

The researchers hope to track the monkeys for 5 to 10 years, and will start the project with two to three monkeys, reported The Wall Street Journal.