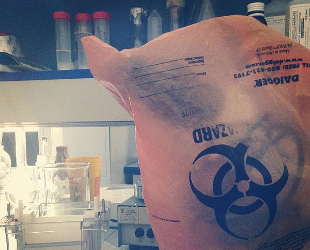 WIKIMEDIA, R. BEKTAEVThe White House Office of Science and Technology Policy (OSTP) and Department of Health and Human Services last week (October 17) announced it was launching a detailed review into so-called gain-of-function research, in which pathogens are manipulated to alter their capabilities. Such research made headlines in 2012 after two groups instilled the avian influenza virus H5N1 with the ability to transmit between ferrets through the air—a feat that prompted a year-long moratorium on H5N1 research. Now, in the face of threats like influenza, SARS, and MERS, which have killed scores in the Middle East and Asia, the government is instituting a pause to gain-of-function funding for experiments involving these deadly viruses.

“NIH has funded such studies because they help define the fundamental nature of human-pathogen interactions, enable the assessment of the pandemic potential of emerging infectious agents, and inform public health and preparedness efforts,” National Institutes of...

The move comes after as many as 75 scientists at the US Centers for Disease Control and Prevention (CDC) were exposed to anthrax in June and, a few weeks later, US Food and Drug Administration (FDA) employees found 16 forgotten vials of smallpox in storage. Last month, the government released new regulations regarding dual-use research, but interestingly, gain-of-function research was omitted from the report. Now, the government is specifically reviewing such experiments, and in the meantime is pausing funding for gain-of-function research projects “that may be reasonably anticipated to confer attributes to influenza, MERS, or SARS viruses such that the virus would have enhanced pathogenicity and/or transmissibility in mammals via the respiratory route,” according to an OSTP statement.

In addition, the government is encouraging leaders of ongoing gain-of-function projects involving these viruses to voluntarily stop their research until the risks and benefits are more fully addressed by the newly revamped National Science Advisory Board for Biosecurity (NSABB) and the National Research Council (NRC) of the National Academies. The NSABB will meet tomorrow (October 22) to discuss oversight of this type of research, and how it fits with federal rules and regulations. Meanwhile, the NRC will organize two scientific symposia—first to further understand gain-of-function research, then later on in the deliberative process, to discuss the NSABB’s draft recommendations. The broader life-sciences community will also be invited to give its feedback during this review process, according to the OSTP. When a final policy is adopted, the funding pause will lift.

“The government has finally seen the light,” Peter Hale, executive director of the Foundation for Vaccine Research, told The New York Times. “This is what we have all been waiting for and campaigning for. I shall sleep better tonight.”

Even those who actively advocate for gain-of-function research seem to agree with the move. Boston University microbiologist Paul Duprex, a leader of Scientists for Science, a group that favors such research, told ScienceInsider that there is “precedent” for a pause and that he is looking forward to “the presentation of hard evidence and the discussion of the data.” Harvard University epidemiologist Marc Lipsitch agrees: “I think the deliberative process is exactly what we and also Scientists for Science have called for.” Both Lipsitch and Duprex will speak before the NSABB this week.