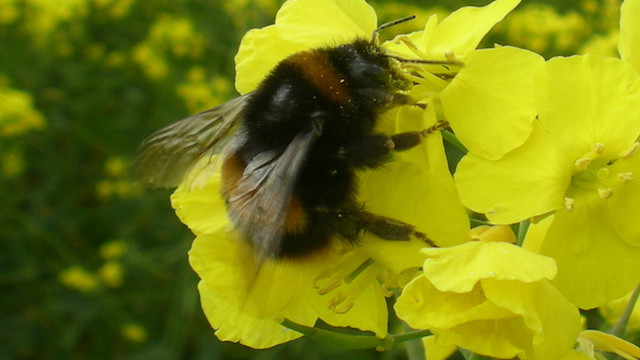 Bombus terrestris foraging on oil seed rape.DARA STANLEYSeveral bumblebee species are declining in both the United States and Europe, and earlier this year, the rusty patched bumblebee (Bombus affinis) was declared endangered by the US Fish & Wildlife Service. Studies suggest that a number of factors, including climate change and pesticides, are to blame.

In a new study, published today (May 3) in Proceedings of the Royal Society B, scientists report that thiamethoxam, a neonicotinoid insecticide previously connected to population declines among honey bees and bumblebees, impairs the ability of queens bees to breed.

Researchers at the Royal Holloway University of London and the University of Guelph in Canada studied 506 queens across four bumblebee species (Bombus terrestris, B. lucorum, B. pratorum, and B. pascuorum). “Almost nothing’s been done on...

Their analysis revealed that thiamethoxam exposure impaired ovary development, and, in two of the species, resulted in less food intake. "We consistently found that neonicotinoid exposure, at levels mimicking exposure that queens could experience in agricultural landscapes, resulted in reduced ovary development in queens of all four species we tested," coauthor Gemma Baron said in a statement.

In another study, published last week (April 26) in Scientific Reports, scientists found that thiamethoxam exposure also altered honey bees’ ability to fly. “Honey bee survival depends on its ability to fly, because that’s the only way they can collect food,” coauthor Simone Tosi of the University of California, San Diego said in a statement. “Their flight ability is also crucial to guarantee crop and wild plant pollination.”