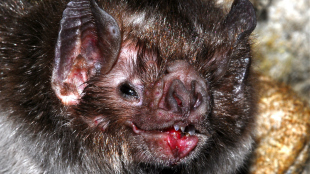 WIKIMEDIA, DESMODUSMiddle East respiratory syndrome has killed 58 humans since the MERS coronavirus (MERS-CoV) was first detected in 2012—a mortality rate of nearly 50 percent. Researchers have suspected that bats and camels were the source of the virus, and new data published today (October 10) in Virology Journal add weight to the former as the original reservoir of the disease.

“Our analysis suggests that an evolutionary lineage leading to the current MERS-CoV co-evolved with bat hosts for an extended time period, eventually jumping species boundaries to infect humans, perhaps through an intermediate host,” Jie Cui, the lead author of the paper and an evolutionary virologist at the University of Sydney in Australia, said in a press release.

Cui and his colleagues scrutinized the mRNA sequences of the cell surface receptor, DPP4, which MERS uses to break into the host cell. They found a higher ratio of nonsynonymous-to-synonymous nucleotide substitutions...

An upcoming concern regarding MERS is next week’s massive Hajj in Mecca and Madinah, which can draw millions of pilgrims. Most of the MERS deaths have been in Saudi Arabia.