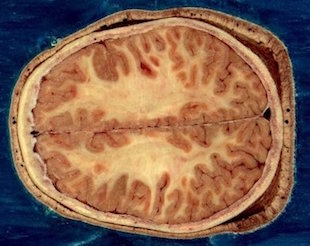 Human head sliceWIKIMEDIA, NATIONAL LIBRARY OF MEDICINEScientists compared gene expression in the brains of people with autism and schizophrenia with that in controls, finding 106 genes that were expressed at lower levels in the brains of the former groups, according to a study published last month (May 24) in Translational Psychiatry. The findings add to growing evidence that the disorders may be linked in some way.

“On the one hand, it’s exciting because it tells us that there’s a lot of overlap,” Jeremy Willsey, a professor of psychiatry at the University of California, San Francisco, who was not involved in the work, told Spectrum News. “On the other hand, these are fairly general things that are overlapping.”

The findings agree with those of previous studies, which have found genetic commonalities among these three disorders (although some research suggests that schizophrenia may be more similar to bipolar disorder than to autism).

It’s not yet clear whether the similarities between autism and schizophrenia gene expression reflect a common mechanism or are simply the result of other brain changes, study coauthor Shannon Ellis, a graduate student in Arking’s lab, told Spectrum News. “We can’t say anything about whether this is cause or effect,” Ellis said.