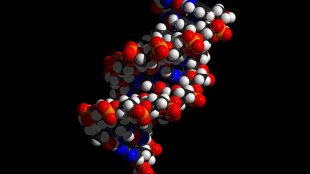 PIXABAY, SKEEZESynthetic biologists have created two artificial nucleotide bases that pair up with one another and, unlike previous iterations of lab-made DNA, can incorporate into genetic sequences to form a properly structured double helix. The team has also used these artificial nucleotides to engineer genetic sequences that stick to cancerous, but not normal, cells.

Steven Benner of the Foundation for Applied Molecular Evolution in Gainesville, Florida, and colleagues expanded the genetic alphabet with two bases, called Z and P. In one paper, published May 11 in the Journal of the American Chemical Society, the team provided structural evidence that multiple adjacent pairs of Z:P could...

Then, in a second paper published May 12 with additional colleagues, Benner created a library of genetic sequences with a random string of nucleotides that included the Z and P bases. The researchers then mixed these with liver tumor cells to see which ones would stick. Those that stuck to the cells were then mixed with normal liver cells to weed out the ones that also bound to the normal cells. The team then took the remaining sequences and put them through the process again, and repeated the whole procedure multiple times.

In the end, the team pulled out more than a dozen genetic molecules that specifically bound the tumor cells. Those that were the strongest contained Z or P in the sequence. “Only the weaker binders contained no Z or P at all,” the authors wrote. “This suggests that this system explored much of the sequence space available to this genetic system and that GACTZP libraries are richer reservoirs of functionality than standard libraries.”