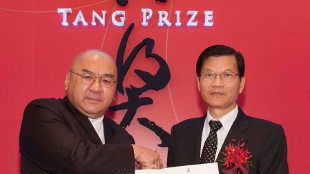 Samuel Yin, a Taiwanese real estate and investment giant, has funded a science award that gives larger cash rewards to individual scientists around the world and also supports research institutions. At a total of $1.7 million for either a winning institution or individual in each of four fields, the new Tang Prize outbids the Nobel Prize, which awarded about $1.2 million per prize in 2012.

Yin has given about $102 million to endow the Tang Prize Foundation, named after China’s 7th century Tang Dynasty, which was considered a golden age for innovation and development for China.  “I hope the prize will encourage more research that is beneficial to the world and humankind, promote[s] Chinese culture, and make[s] the world a better place," Yin said in a press release...

The first call for proposals from institutions and individuals will be sent out this May, and the first winners, chosen by Taiwan’s Academia Sinica, will be announced in June 2014, and every 2 years afterward. The prizes will cover areas typically underrepresented by the Nobels, such as sustainable engineering, medical and biotech research, sinology, and law.