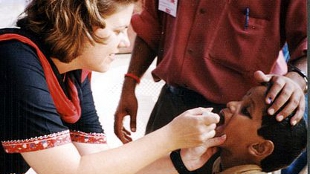 A child receives an oral polio vaccine in IndiaWIKIMEDIAThree polio vaccinators in Pakistan were shot and killed yesterday (December 19), bringing this week’s death toll to nine, with two additional people injured in the attacks. The Taliban is not the confirmed source of the attacks, but is highly suspected. The group has opposed polio vaccination, for fear that it’s a cover for a more sinister plot, such as sending in American spies spies or sterilizing Muslim children.

For now, the Pakistani government has suspended the vaccination campaign, Oliver Rosenbauer, a spokesman for the World Health Organization (WHO), told ScienceInsider, which could affect future efforts; such organized drives are usually held four to six times per year. “For sure this is a major setback,” Rosenbauer said.