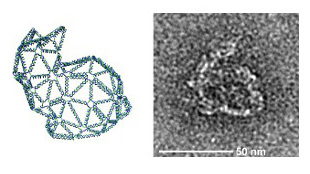 ERIK BENSON AND BJÖRN HÖGBERGDNA can be folded into a variety of nanoscale mesh structures that are more stable than previous iterations of such origami, researchers from Sweden’s Karolinska Institute and their colleagues showed in Nature this week (July 22). “This is not the first study to present polygon meshes constructed from DNA—decades of research have produced dozens of methods for building DNA-based polyhedral and wireframe structures. But the current work arguably presents the most versatile and streamlined design method,” Tim Liedel, an experimental physicist at Ludwig Maximilians University Munich who was not involved in the work, wrote in an accompanying commentary.

To achieve these more-stable DNA origami structures, the researchers developed an automated algorithm that traces scaffold sequence along structural targets.

“The learning curve is really improved here, it’s really easy to design them now,” study coauthor Björn Högberg of the Karolinska told The Washington Post. According to the Post, “the group is publishing the code for their algorithm in the hopes of helping other labs produce these complex structures more quickly and efficiently.”