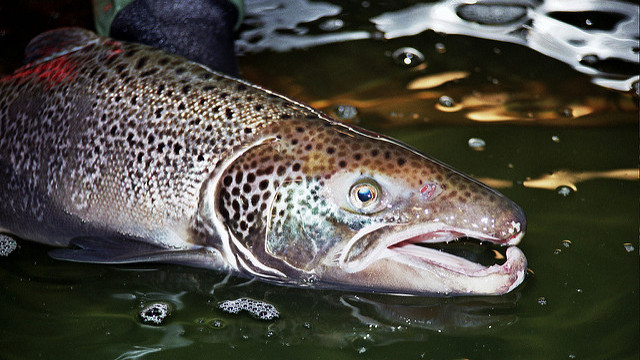 Atlantic salmonFLICKR, E. PETER STEENSTRA, US FISH AND WILDLIFE SERVICEUpdate (August 29): Washington Governor Jay Inslee and Commissioner of Public Lands, Hilary Franz, have put a hold on Cooke Aquaculture’s plans to expand its net-pen operations into the Strait of Juan de Fuca, The Seattle Times reports. Already, the escaped Atlantic salmon have spread over a 60-mile area, the newspaper says. Taking matters into their own hands, fishermen of the Lummi Nation snagged more than 200,000 pounds of the fish over the weekend.

A malfunctioning net at a Cooke Aquaculture fish farm near Cypress Island in Washington State resulted in the release of some 305,000 10-pound Atlantic salmon over the weekend, The Seattle Times reports.

“[E]xceptionally high tides and currents coinciding with this week’s solar eclipse” caused the “structural failure” of a net pen, Cooke says in a statement. “It appears that many fish are still contained within...

The net that malfunctioned had about 3 million pounds of fish in it, Ron Warren, fish program assistant director for the Washington Department of Fish and Wildlife (WDFW), tells The Seattle Times.

The spill was first spotted on Sunday (August 20) by fishermen south of Bellingham Bay angling for the chinook salmon that are native to the area. Instead, they pulled up their nets to find them full of the Atlantic variety. “It’s a devastation,” Ellie Kinley, a local Puget Sound fisher, tells The Seattle Times. “We don’t want those fish preying on our baby salmon. And we don’t want them getting up in the rivers.”

G.I. James, a member of the Lummi Natural Resources staff and fish commission, agrees. “It is potentially a disease issue, and impact on our fish, as dire a shape as they are in, right now any impact to them is difficult to absorb,” he tells The Seattle Times.

For these and other reasons, the Atlantic salmon net pen facilities in the Puget Sound were already controversial, with an anti-farming protest set for next month as Cooke Aquaculture proposes to open a new facility in the Strait of Juan de Fuca, within the migratory path of local salmon. “For three decades, Atlantic salmon net pens have been quietly operating in Puget Sound,” Kurt Beardslee, executive director of the Wild Fish Conservancy, says in a release, according to a blog hosted by The Spokesman-Review. “Now that the industry is poised to dramatically expand its operation in the Sound, the public is learning about the destructive record of net pens, locally and around the world.”

The WDFW is working with Cooke to develop a complete spill-response plan, but for now has invited the public to help, with no limits on the size or number of Atlantic salmon that can be caught. “Catch as many as you want,” Warren tells The Seattle Times. “We don’t want anything competing with our natural populations. We have never seen a successful crossbreeding with Atlantic salmon, but we don’t want to test the theory.”

Correction (August 23): The subhead of this story has been updated to clarify that the high tides blamed for the net failure were a result of the solar eclipse, but didn’t occur during the event. The Scientist regrets the error.