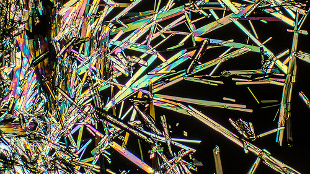 Hippuric acid, one of the most abundant organic metabolites in human urineFLICKR, SARAH OROS

Everything you ever wanted to know about the chemical makeup of human urine is now freely accessible in an online database, thanks to a team of researchers who are cataloguing their way through the complex metabolic compositions of bodily fluids. Studying the metabolome—or the sum of all metabolites in a biological sample—can reveal a wealth of information about how environmental factors affect human health. So far, the team has inventoried the metabolites found in blood serum, saliva, cerebrospinal fluid, and now, as reported in PLOS ONE this week (September 4), urine.

Urine does far more than eliminate water-soluble waste from our bodies. “While largely viewed as a waste product, urine has considerable value as a diagnostic biofluid,” the study’s authors write. Humans have leveraged that value for millennia, using urine to diagnose diseases from...

To systematically characterize the metabolites found in human urine, the researchers searched existing literature and conducted their own extensive experiments using nuclear magnetic resonance spectroscopy, gas and liquid chromatography, and mass spectrometry. Previously, only a few hundred metabolites had been documented—a mere fraction of the 3,000 counted in this newest study.

To foster future research, the team established a comprehensive database of known urine metabolites. “We had no idea there could be so many different compounds going into our toilets,” lead author David Wishart from the University of Alberta told Popular Science.