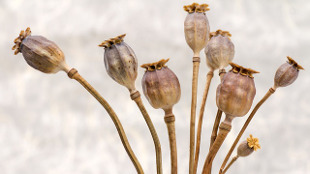 The recent identification of a poppy plant gene has brought researchers one step closer to making morphine in the lab rather than in fields. The protein the gene codes for, called STORR, was described last week (June 25) in Science and represents the last cog in the enzymatic machinery required to engineer yeast to produce morphine.

“The publication of this gene provides the missing link for the production of morphine in yeast—there's no doubt about it,” study coauthor Ian Graham, a geneticist at the Center for Novel Agricultural Products at the University of York told the LA Times. “I think it's only a matter of time before there is a proof-of-concept demonstration in yeast that this can happen.”

Researchers at the University of York and GlaxoSmithKline in Australia identified STORR by screening randomly-generated mutant poppy plants for their ability to make morphine. Plants with mutations in...

“Plants produce an amazing array of natural chemicals,” Graham in a statement. “Discovery of this STORR gene fusion provides us with new insight into how poppy plants have evolved to produce the most effective painkillers known to man.”

But the discovery is also adding to concerns that it may soon be possible to produce “home-brewed” heroine. “You can see how quickly the technical challenges are being overcome, even faster than we anticipated,” Tania Bubela a researcher at the University of Alberta School of Public Health who was not involved with the study told the LA Times. “It speaks to the fact that policymakers need to get ahead of the technology.”