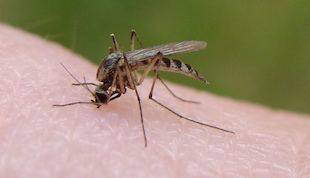 WIKIMEDIA, WILDTURKEYBeing bitten by a mosquito is an annoyance, but that’s not the worst part: a recent mouse study suggests the swelling and inflammation caused by the bite may boost viruses’ ability to replicate and cause disease. Researchers at the University of Leeds in England infected mice with Zika, dengue, and chikungunya, either by injection or via bites from the Aedes aegypti mosquito, and found that the latter produced order-of-magnitude higher amounts of virus, suggesting the bite itself may enhance the severity of infection, the team reported Tuesday (June 21) in Immunity.

“Mosquito bites are not just annoying—they are key for how these viruses spread around your body and cause disease,” study coauthor Clive McKimmie, a research fellow at Leeds, said in a statement. “We think the bite itself is affecting the systemic course and clinical outcome of the infection.”

When a mosquito bites someone, its...

The findings have yet to be replicated in humans, but they could have important ramifications for controlling the spread of mosquito-borne viruses like Zika. “We now want to look at whether medications such as anti-inflammatory creams can stop the virus establishing an infection if used quickly enough after the bite inflammation appears,” McKimmie said in the statement.

Kristen Bernard, a virologist at the University of Wisconsin–Madison who was not involved in the study, praised the work, but told Scientific American that reducing infection by treating bug bites seems “far-fetched” because the person being bit would have to notice the bite and have medication at-the-ready.